Where did the visitors come from?

The north west German main catchment area on a map from the NS-Gaue (region) (Excerpt), 1944

By far, the majority of the visitors came from a radius of about 100 km. The NS regime prohibited local harvest festival celebrations for the whole catchment area - todays Lower Saxony and east Westphalia. They did not want any competition to arise for the central event at the Bückeberg.

Where possible all German Gaue (regions) should be represented by a farming delegation in traditional costume. With a huge propaganda effort the press reported on groups of visitors from more distant German regions.

“A charted train from Passau arrived at the Hamelin main train station at half past eleven on Saturday evening, and these passengers had left at half past five on Friday evening, which meant that they had been travelling on the train for 30 hours. There and back took 60 hours - one can definitely speak of a sacrifice”. (Deister-und Weserzeitung Hameln from 08.10.1935). 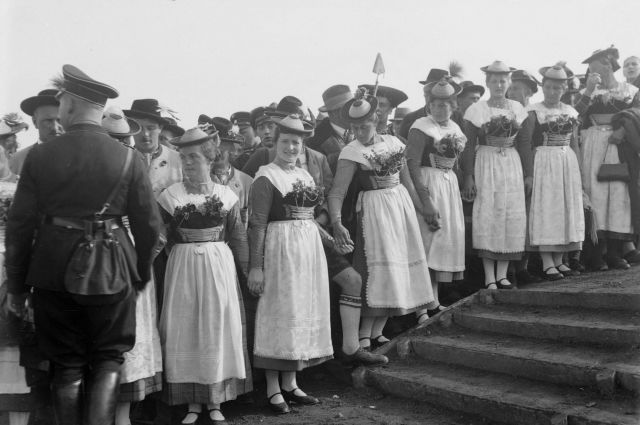 In 1935 the NS-Gau (region) Upper Bavaria organised a five-day “Upper Bavarian organised train trip”  to the Bückeberg. Each community of the Gau (region) was represented by a male or female farmer. At the expense of the NSDAP, the group were accommodated in nearby Bad Pyrmont, made trips nearby, performed an Upper Bavarian Folklore evening and as the final highlight attended the Reichserntedanfest (Reich Harvest Thanksgiving Festival) at the Bückeberg.