The Media´s Representation of the Event 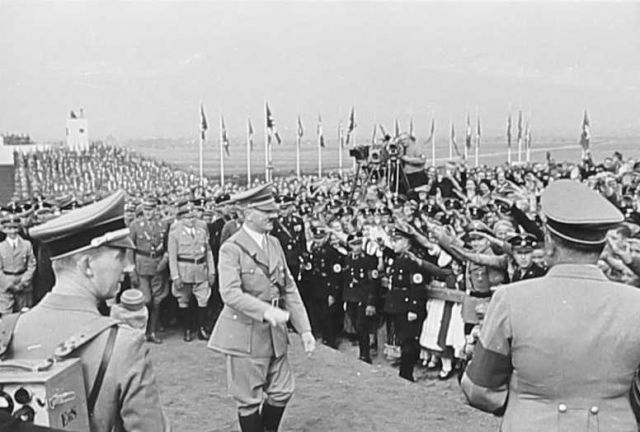 Hitler is surrounded by a radio reporter (left), camera team and photographer (Heinrich Hoffmann right, with his back to the observer). The UKW-transmitter, carried by the radio reporter on his back, makes contact with the radio station, which is in the tethered balloon floating above the arena.

Apart from influencing the participants at the event, the purpose of the Reichserntedankfest (Reich Harvest Thanksgiving Festival) was to provide propaganda pictures and reports of the Führer und Volk. This was carried out throughout the whole of Germany via various forms of media. By doing this the popular opinion was strongly influenced according to how the NS intended.

All pictures and reports of the event were subject to censorship. The Ministry for Propaganda did not mention mishaps and ensured a glorified report as well as a barrage of “nice” photos.

Radio transmissions, weekly news reports and “documentary” films as well as newspaper articles, magazines and books created a “second reality” (Sösemann) for those Germans, who could not experience the Fest (festival) live themselves.

The “Reich Harvest Thanksgiving Festival" in Books and Publications

A number of propaganda publications, some of which were elaborate, appeared directly after the 1933 Fest (festival).

The event was also documented in school books and in the popular cigarette card collector’s albums. 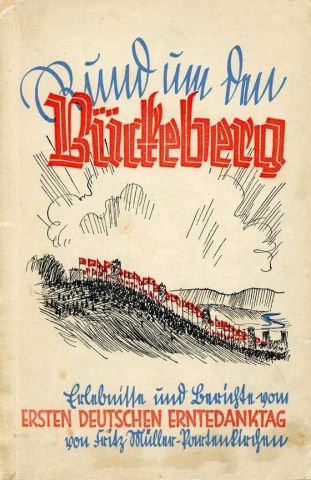 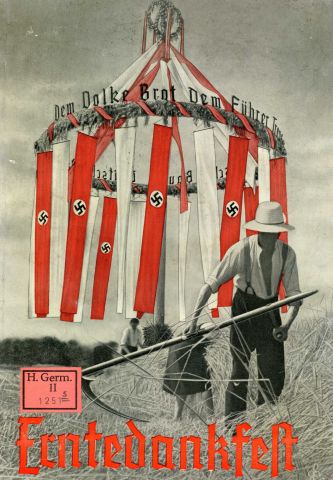 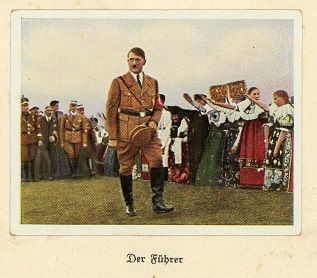 Stickers in a cigarette sticker album. 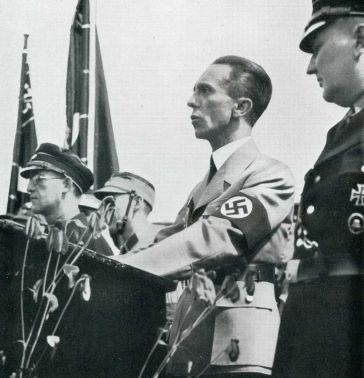 The importance of propaganda for the NS Regime is often underestimated. It was essential, not only for the conquest, but also to maintain power. Goebbels himself put it as follows:

“The nature of propaganda is to win over people for an idea so inwardly, so vibrantly, so that in the end they are addicted to it and cannot let go.” (Quoted according to Fest, Das Gesicht des Dritten Reiches, München 1963, page 138.)

People who did not want to be convinced were pressurised, intimidated or even violently persecuted. That particularly applied to those, for example the Jews and Sintis, who from the onset for racist and other reasons, were excluded from the NS-Volksgemeinschaft (NS-national community).

Propaganda and terror went hand in hand, they were the two sides of a coin, and during the NS-dictatorship were always openly present.

Joseph Goebbels (1897-1945) was active in the NS-movement as of 1924. As the Head of Propaganda, or later the Minister of Propaganda, he was one of the main figures responsible for the rise of Hitler and the stabilisation of the NS-dictatorship.

With skilful rhetoric, professionally staged mass events and the targeted use of the new mass media radio and film broadcasts, he succeeded in convincing and winning over the majority of Germans for the NS-Regime.

Goebbels` hate propaganda played a significant role leading to the holocaust, genocide and war of extermination.