Organising a mass event for hundreds of thousands in a provincial location far from any cities, was a complex and costly task. 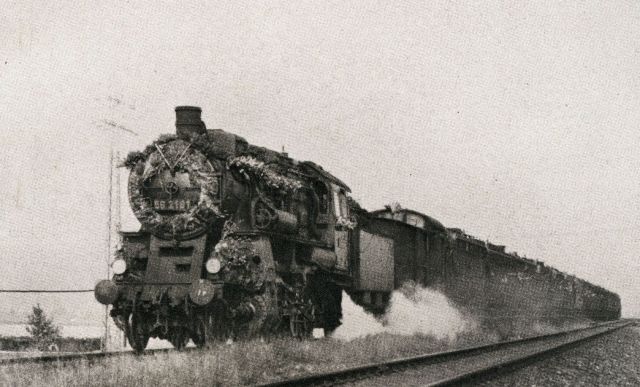 The NS-Regime had to ensure that enough people from further afield could reach the Bückeberg by public transport. In those days the main mode of transport was the train. In addition to the regular train service, hundreds of additionally charted trains were used. Each train seated approximately 1200 passengers. Attractive price reductions of up to 75 % were offered.

The NS-Propaganda machine was running at full speed beforehand so that “the whole population could be encouraged to participate.”

“Only the lame, invalid, lazy, slow and people not complying to the states ideals, were allowed to stay at home; everyone else had to travel to Hamelin on 1st October.” 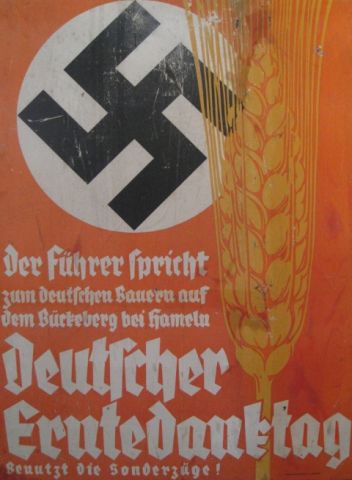 Propaganda occurred in the form of brochures, posters and films.The press, radio and special events also advertised the participation of the major event.

At the same time local NS-officials were responsible for mobilising a specified number of participants. By making home visits, for example, they urged party members and the remaining Volksgenossen (comrades) to attend.

The growing acceptance towards the NS-Regime by the population, however, was by no way only due to intimidation and being dictated to. The Reichserntedankfest (Reich Harvest Thanksgiving Festival) developed accordingly from year to year into a more and more popular mass spectacle. The demand for seats in the specially chartered trains was greater than was available.

As of 1935 the difficulties in organising the event, which in 1933 and 1934 had given rise to considerable criticism, had been completely overcome. Apart from Hitler´s appearance, it seemed that the increasingly extravagant Schauübung (military shows) really drew the crowds.

“Experience from previous years has proven that the population has shown an increasing interest from year to year regarding Harvest Thanksgiving Day. The Führer´s presence, the military demonstrations and all the other events are proving to be a deeply moving experience for all professional sectors”. (Kreiszeitung Detmold  07.09.1936, Landesarchiv NRW, Abt. Ostwestfalen-Lippe, Detmmold, L113 Nr. 327)

A third specially charted train was made available for a further 1000 passengers who had signed up and for whom initially no seats were left.