The basic Elements of the Arena´s Design

The Terrain and the basic Elements

The site, with its four striking features, offered Speer a framework: 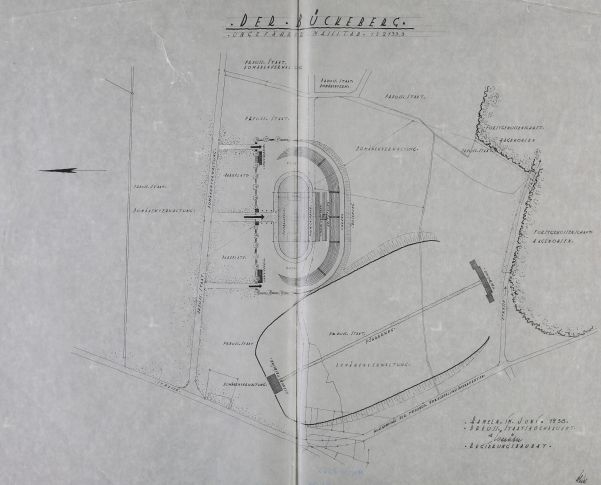 The stadium indicted in the drawing was not built.

A further element concerning the arena´s design which can barely be detected on drawings and photos:

It was barely visible that Speer´s construction was not part of the natural countryside. Despite moving massive amounts of earth, the arena appeared natural. The area was “constructed nature.”

In order to support the propaganda of a simple “natural” farming festival, Speer used natural material as much as possible for the construction work. Stages, rostrums, stairways, railings and flagpoles were made of wood. Garlands were made of fir sprigs and were just as hand made as the Fest (festival) emblems. The numerous “unnatural” technical installations such as telephone switchboards and broadcasting stations, electrical wiring, water pipes, toilets etc were to be as invisible as possible.

At the top of the slope Speer finally erected a huge public gallery for 3000 guests of honour. This took up almost half the width of the upper arena. 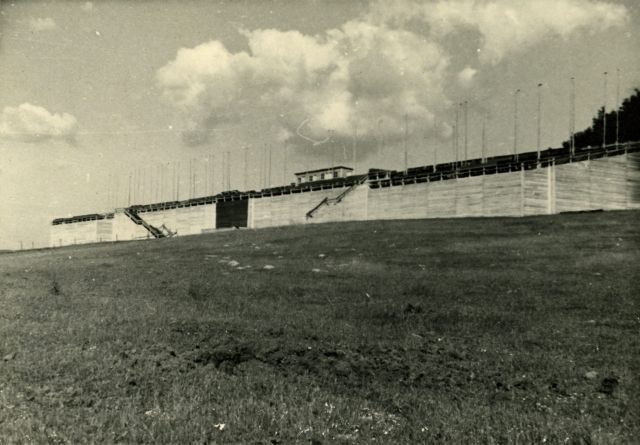 The completed upper stand including the “radio headquarters”, around 1941

The upper stand outlived the NS-era and existed until the early 1950s.

The front rows of seats were reserved for the NS-Elite and diplomatic Corps, the seats rising towards the back were for a representative cross-section of the NS- Volksgemeinschaft (National Community.) At a height of at least 4 metres the stand guaranteed a clear view of the event.

An altar with the harvest festival offerings was at the centre of the stage underneath an oversized swastika flag.

The main stage of the monumental amphitheatre was at the lower end and it was here that Speer planned to have Hitler´s Rednerkanzel (speaker´s pulpit) in the form of a blunted pyramid. It formed a visible central point for everyone and was understood as “an expression of strong willpower for the marching masses.” (Speer, 1933)

The 40m wide stage front and the 15 metre wide sides of the Rednerkanzel (speaker´s pulpit) had nine steps upon which the tightly packed SA took up position with banners and flags. Hitler formed the human pinnacle of the pyramid, in the midst yet at the same time singled out from his uniformed followers as Führer. 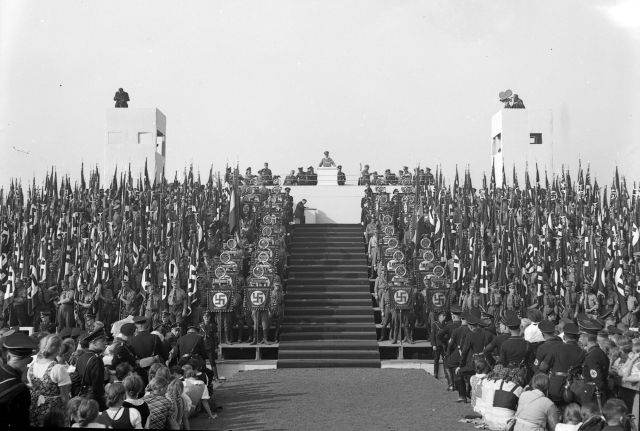 On the 1st May-Celebrations in Berlin, Speer erected four nearly 14 metre tall flag poles in order to form an optical edge to the stage and at the same time showing a great symbol of power. As of 1935 these were replaced by 2 simple towers, from which film crews could capture the event.

The Mittelweg (The Central Pathway) 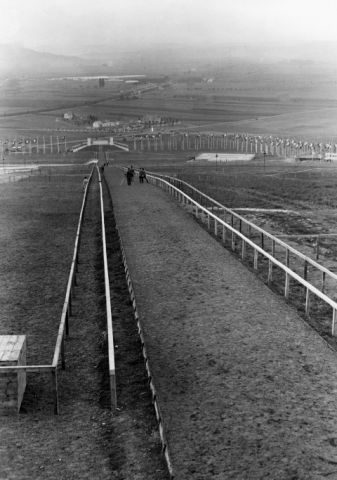 An 800 metre long, approx. 5 metre wide and half a metre wide elevated dam-like path connected both stages. Hitler´s Weg durch das Volk (pathway through the people) was presented like a catwalk.

The Ring of Flags 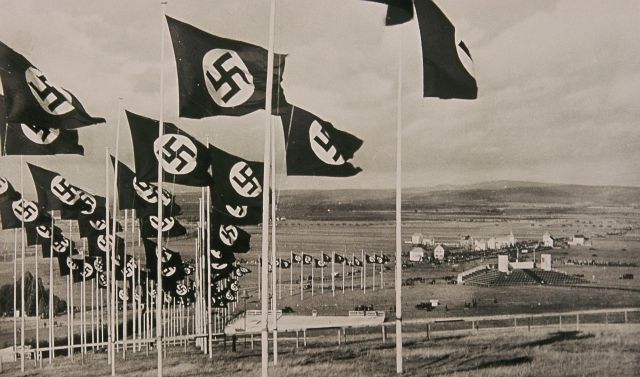 Speer surrounded the arena with a horse shoe shaped, open ended three rowed ring of flags. With this frame he wanted to mark the inner circle and give those assembled “the feeling of belonging” (Speer 1933), a Volksgemeinschaft (a national community.)

The Double Incline of the Arena 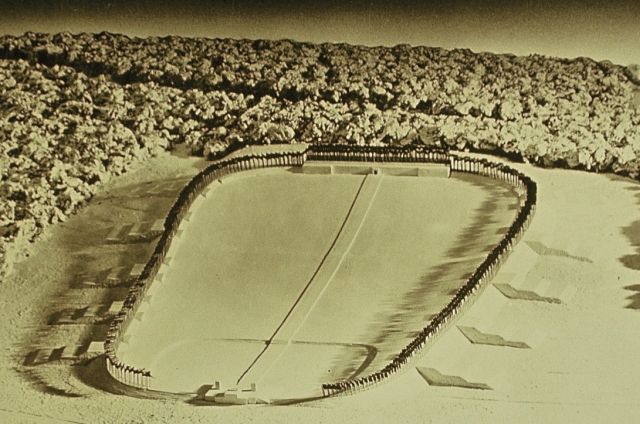 Planned final version of the rally arena, model of 1934

The planned design, probably by Speer, was not realised.

In order to enhance the effect which the sloping hillside offered, Speer made the sides of the natural stage slope gently downwards towards the Mittelweg (central pathway). In so doing the arena had a double incline and was similar to an amphitheatre.

This way the participants not only had a clear view over the heads of those assembled below but also of the Mittelweg (central pathway). Above all though: the participants saw one another. It was Speer´s key motive, to present to those assembled the “multitude and power” they represented. “It will have the greatest effect particularly on simple people” (Speer 1933)