Extending the Transport Routes around the Bückeberg 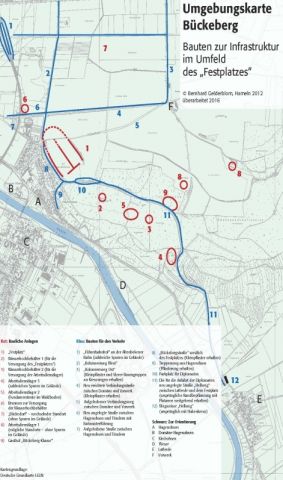 In 1933 there were severe traffic jams in several places such as in the extremely narrow road of Hämelschenburg and between Tündern and Hagenohsen, where a Kolonnenweg (patrol path) crossed the railway tracks causing long waiting times due to the numerous specially chartered trains.

These bottle necks were removed immediately. In Hämelschenburg a section of the cemetery was sacrificed for the new road through the town. The road between Tündern and Hagenohsen received a railway tunnel.

To better cope with the Anmarsch (arriving march) of the hundreds of thousands and, for those times, the immense volume of traffic, the mostly still unsurfaced roads around the Bückeberg were paved and several new roads were built.

The Bückeberg is visible on the right in the background.

The roads north of the Bückeberg are today partly without a use but they previously served as Kolonnenwege (patrol roads) and were to enable a quick journey from the east for the vehicles and tanks of the German armed forces.

In 1933 the statesmen and “honorary guests” had to squeeze their way through the masses of visitors and then endure the difficult climb up the Mittelweg (central pathway). In 1934, a special access road was quickly built which came from the direction of Latferde in the south and led onto the crest of the Bückeberg. From then on, the statesmen and “honorary guests” boarded busses at Welsede station, crossed the Weser on a pontoon bridge near Grohnde and drove from Latferde along the new road to a parking area immediately above the Ehrentribüne (honorary rostrum). 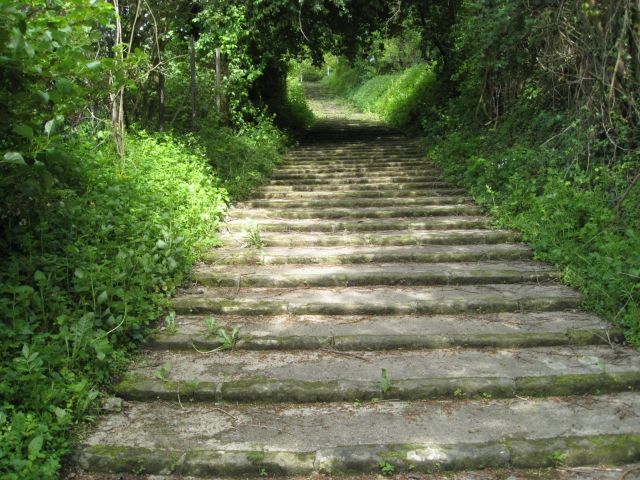 The previous Treppenkolonnenweg (convoy steps) of Hagenohsen to the top of the hill, 2010.

In 1937 the “stairway” was inaugurated with extravagant propaganda. It winds its way from the village of Hagenohsen on the western slope up to the parade ground. Its width and the measurement of the steps were based on six SA men marching alongside each other.

In addition to the existing six stations, the Reich railway built a new station in Afferde. They also created a further six tracks and exits at Emmerthal station. In Tündem they installed a station south of the existing stopping point with particularly long platforms. This is where the Führer’s specially chartered train arrived and departed from 1936.

Motorway planning 1937: Route through the idyllic valley of the Emmer with a double “view of the Bückeberg”, 1937

In the medium term, the railway line between Hamelin and Emmerthal was to be laid. On the one hand, it seems to have ruined the image of rural paradise far removed from technology, which propaganda promoted about the Bückeberg and on the other hand, it was an obstacle for the military exercises which were requiring more and more space.

As achieved in Nuremberg, the NS regime wanted to connect all the large parade grounds with motorways. The NS regime relied on the car. Thus, a southern stretch of the Dortmund – Hanover – Berlin (today A2) motorway was planned for the Bückeberg to enable reaching the rally grounds from the south.

Neither the construction of the motorway nor moving the railway tracks was realised due to the War. 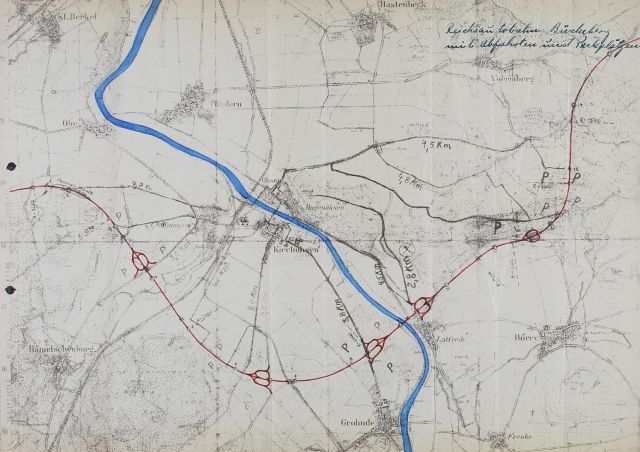 Planned route through the Humme valley with exits and slip roads and large parking areas, 1938