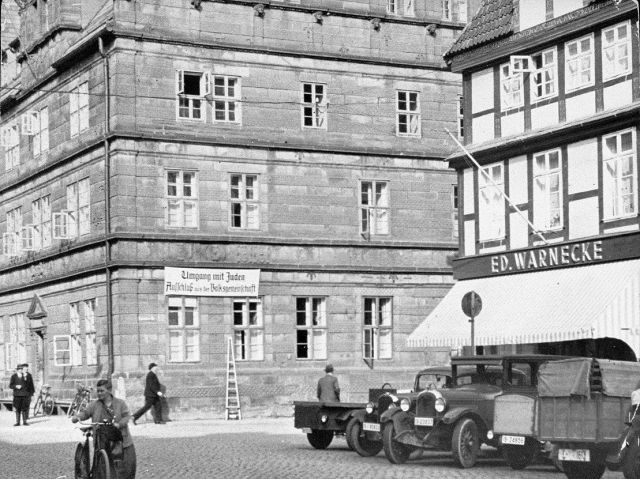 Anti-Semitic banner on the Hamelin Hochzeitshaus (Wedding house): “Dealing with Jews. Exclusion from the National Community”, undated (around 1935).

The forming and self-affirmation of the NS- Volksgemeinschaft (National Community) during the festival excluded certain groups of people from the start for racist and ideological reasons. Jews and “gypsies”, political opponents and supposed “social misfits”, homosexuals and the mentally handicapped. All of these people were persecuted with murderous consequence. The reign of terror against these people was there for all to see. The NS-Regime needed this public show of threat, because it knew that propaganda alone was not enough to convince everyone of the regimes policies, or at least to tolerate them.

Hamelin doctors of Jewish origin were excluded from medical duty at the Bückeberg. Jewish businessmen were not allowed to decorate their shops during the Reichserntedankfest (Reich Harvest Thanksgiving Festival) and on the day of the Feste (festival) they were not allowed to open. 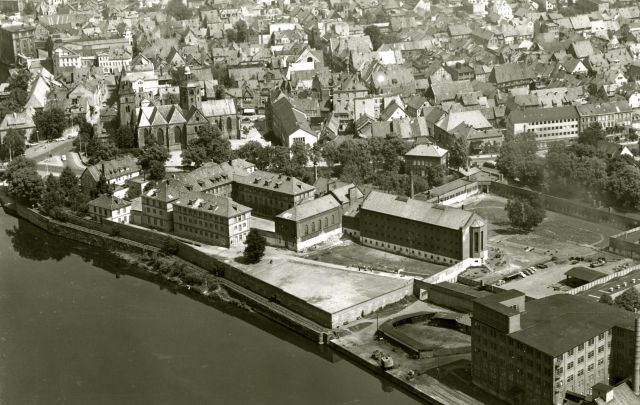 The former Hamelin prison, around 1960

Thousands were imprisoned in the Hamelin prison between 1933 - 1945, who the NS-Regime excluded from the NS Volksgemeinschaft (National Community) and judicially persecuted for racist and ideological reasons. During the Reichserntedankfeste (Reich Harvest Thanksgiving Festivals) local SPD and KPD followers were imprisoned here as potential “trouble makers”.