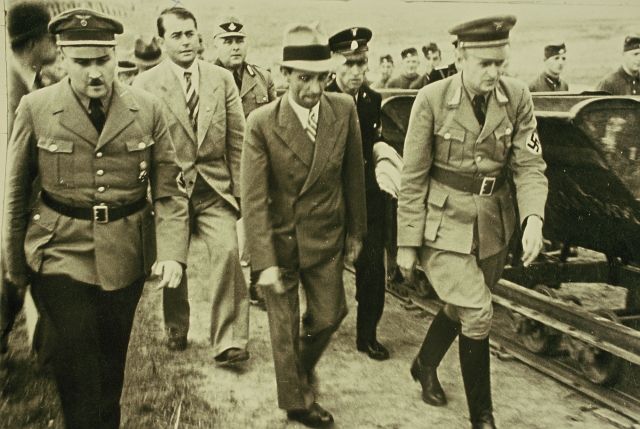 The “creators” of the “Reichserntedankfest” (Reich Harvest Thanksgiving Festival) at the yearly inspection of the arena, 1935

In the late summer of 1933 the Minister of Propaganda Joseph Goebbels commissioned Albert Speer to design an arena for a “rural folk festival in the countryside of hitherto undreamt-of dimensions”.

With the character of a “folk festival” and the location in the “countryside” far from any city, the Reichserntedankfest (Reich Harvest thanksgiving Festival) would be something different compared to other national socialist mass events.

A suitable location In the Weserbergland (Weser region) was found, with the gentle, sloping, treeless Northwest facing slope of the Bückeberg. It offered enough room for the anticipated huge number of visitors. 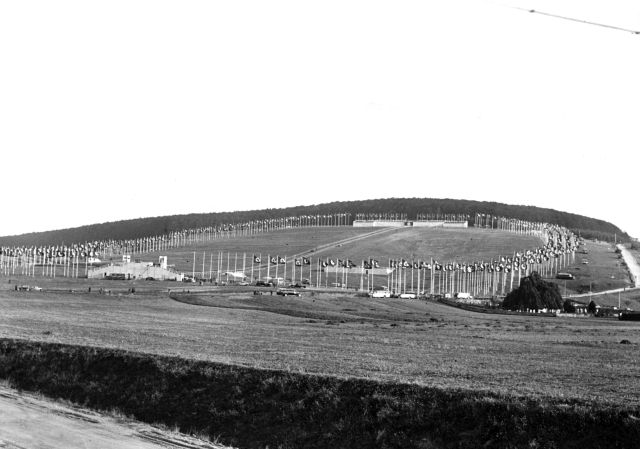 Speer was given a free hand in designing the arena at the Bückeberg. He only had to concentrate on the design of the site, and not worry about existing buildings as was the case in many inner- city rally locations. Speer strove to incorporate the arena “naturally” into the Weser valley countryside.

Compared to the flat inner-city spaces, the hillside location had a key advantage in Speer´s eyes:

“Each and every one of the 500000 participants gathered there could see…. They could experience live the demonstrative impact of their (blocked in original) mass rally, of which they proudly were a tiny piece.” It affected the participants in an “invigorating and encouraging” way. (Albert Speer, 1933)