The National Community and the Festival 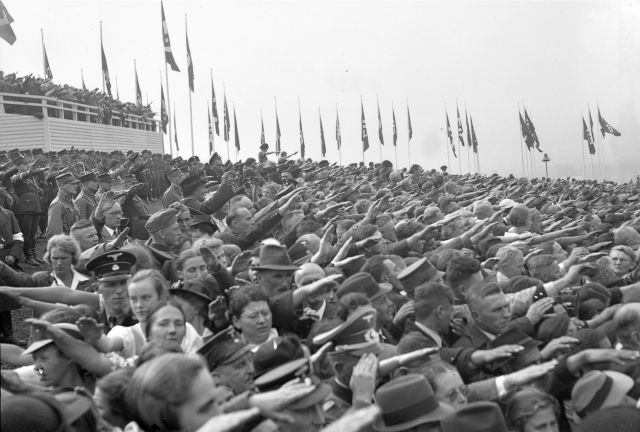 In his speech at the Bückeberg, Hitler spoke of “powerful educational work”, which National Socialism had to perform on the German Nation. Using the rituals of the festival, the masses were formed and disciplined according to the NS values; NS-compliant behaviour was rehearsed. The goal was the shaping of a person who was characterised by obedience, heroism and willingness to make sacrifices.

The mass festival should contribute towards the forming of such a Volksgemeinschaft (national community).

Many used the specially chartered trains, which the Bückeberg travellers had to decorate themselves. Many hiked there in groups, taking several days to reach the Bückeberg.

“The German Nation is coming near to finally finding their lifestyle. It is the style of a marching column”. (Alfred Rosenberg, 1935, in Ders., Gestaltung der Idee, Munich 1936, Page 303). 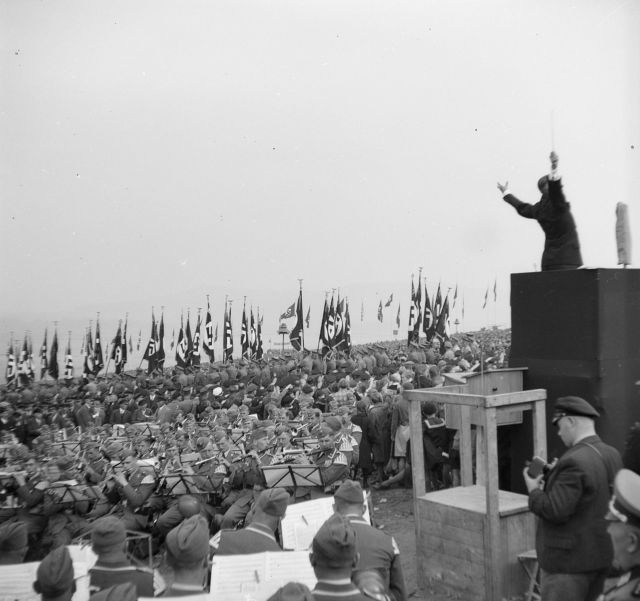 Collective singing, with the military orchestra and mass choir consisting of thousands of participants, including the musical directors, undated (probably 1935).

The emotional monopolisation of the participants was the agenda. They formed a Feiergemeinde (celebratory community). Also the initially more distanced spectators should become participants of a magnificent spectacle, and whose emotions were released at the end in collective cries of joy.

“I was needed! The feeling to be needed for the cause, not to be on the sidelines just watching - this feeling was new for me and was intoxicating”.

“The sensation suppressed the ability to think - a state of numb stupor, which yielded to a lack of willpower and feelings; where else should the necessary masses of executioners and torturers come from? What does a perfect group of followers do? They don´t think, they don´t feel anymore - they follow”.