The NS regime monopolised the Christian harvest thanksgiving festival for its own purposes. Reverting to a deeply rooted custom was supposed to contribute to the legitimacy of the regime in the eyes of its own people. 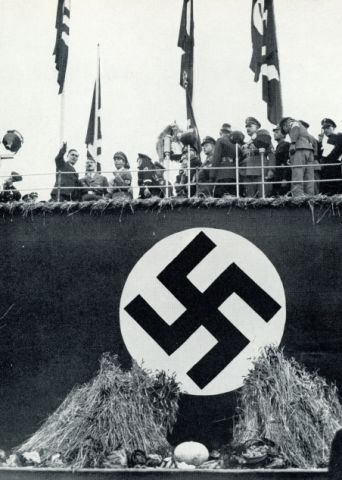 Large Altar with Harvest Offerings under the Swastika, 1933

By using familiar ideas the NS event became acceptable to many. Christian oriented visitors – and that was the vast majority – saw the Fest (festival) in the light of tradition and registered the message of Blut und Boden (blood and soil) with no thought and not even mockingly.

In truth, the NS regime was thinking of a radical renunciation of Christianity. Reichsbauernführer (Reich Farmers‘ Leader) Walter Darré wanted to “lead back” the religious festival to its supposedly Germanic roots and combine a new artgemäßes (appropriate) custom with the Blut und Boden (blood and soil) ideology.

The churches themselves were shut out of the event on the Bückeberg. The organisation management allowed them “a short morning worship near the railway stations.”

1933 was the only year when the programme showed any consideration towards the religious feelings of the participants. After the military exercises were finished, the hymn “Nun danket alle Gott“ (Now thank we all God) was sung by the participants while stretching out their right arms. A prayer followed the concluding grand tattoo. Both were omitted in the following years.

The Evangelical regional church of Hanover, on whose land the Reichserntedankfest (Reich Harvest Thanksgiving Festival) took place, accepted the adsorption of the Havest Thanksgiving by the National Socialists without any criticism. On the contrary, the State Church Office responded on 1st October 1933:

“This festival of giving thanks to the Creator gives the Church the opportunity to point out the obedience towards the Divine Order of Creation as it is being brought home to us in new clarity, in particular by the beliefs of National Socialism.” (Dewezet dated 26.9.1933)

A Pastor Knop went even further. He wrote an article in the Deister- und Weserzeitung (local newspaper) on 1st October 1933 under the title “Harvest Wreath and Crucifix” in which he celebrated the “awakening of our people under the leadership of a man sent to us by God”. “Blood” and “race” along with the native soil and the work of the people on it were the “god given and natural foundations of a people.”

There were reasons for the event organisers excluding the churches from the Fest (festival) itself; they were trying to orchestrate National Socialism as a type of new religion.

The “liturgy” of the Reichserntedankfest (Reich Harvest Thanksgiving Festival) shows a similarity to religious celebrations. The setting is a reminder of large church interiors. The producers used religious terms such as “altar”, “sermon“, “Führer pulpit” and “confession” to give the event a sacred aura. In 1940 an observer from Einbeck speaks of the Bückeberg as a “place of faith” where Hitler spoke to the “religious masses”.