Harvest Symbolism in the Festival Ceremony 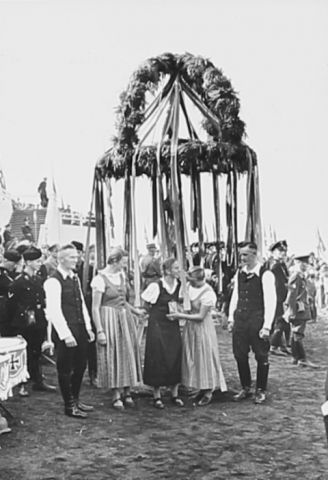 Young Farmers on the Honorary Rostrum before the Presentation of the “harvest wreath” to Hitler, undated (1937)

On his Weg durch das Volk (way through the people) Hitler stepped “up to the heights”. His last steps took him past the Erntealtar (harvest altar) onto the honorary rostrum where the “harvest wreath” was situated. Fanfares and a 21 gun salute from the surrounding hills were blasted while Hitler was climbing the steps to the rostrum and greeting selected honorary guests from the government, military leaders and Diplomatic Corps.

Three “explosions” signalled the official start of the rally to the masses.

However, they heard nothing of the subsequent ceremony; the only part with reference to harvest thanksgiving was not transmitted by loudspeaker. 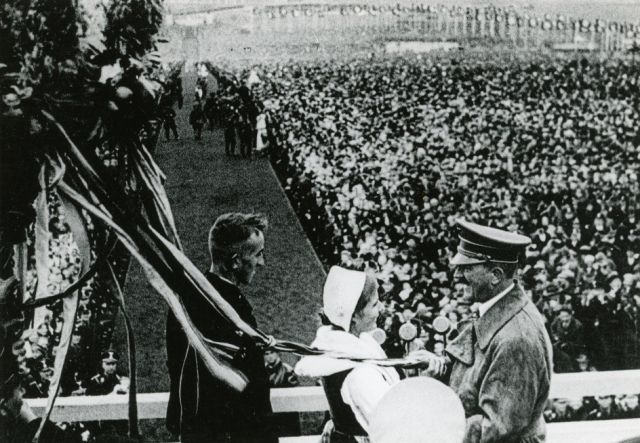 The ceremony of the Harvest Thanksgiving Festival with Hitler, 1936: A farming couple in traditional dress presents the ribbons of the “harvest wreath”.

A farming couple handed Hitler the ribbons of the “harvest wreath” and in 1933 recited the verse:

“My Führer!
You protect our land, our people, our position with a strong hand!
We give you the harvest wreath as a humble sign of our thanks.”

Meanwhile, a mass choir of the Hamelin Singing Circle sang the song “Blessing”.

With no transition, a short opening speech by Goebbels was transmitted and followed by the Schauübung (military display) of the German armed forces at the foot of the hill.