The Ideology of Blood and Soil 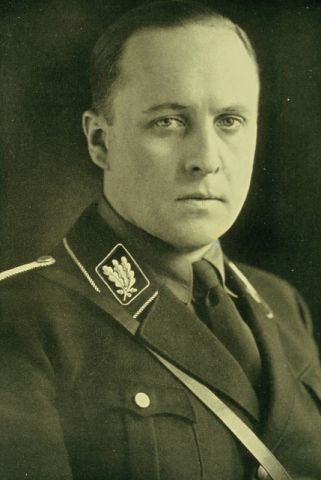 Walter Darré (1895-1953), Reich Minister for Agriculture and Reichsbauernführer (Reich Farmers‘ Leader), in the uniform of an SS Group Commander, 1933

The two expressions Blut und Boden (blood and soil) belonged to the most important formulas of NS values. Thus, the supposedly Urgesetz(original law) of Germanic order of life, the century long unity of generations of farmers (= blood) with their land (=soil) was transferred as an ideal to the present day state and its society. The gesunde (healthy) state should be based on the unity of its eigenem Volk bzw. Rasse) (own people ie race) and eigenem Boden (own soil). For this reason, there was no room in Germany for Fremdvölkische (foreign peoples) for instance for Jews.

Darré considered the farmer to be a Blutsquell (source of blood) for the nation, as a guardian of the people’s irreplaceable valuable goods. For Darré he was also the brave fighter who risked his life for the protection of Blut und Boden (blood and soil). Therefore, the connection between Nährstand und Wehrstand (nourishing state and defending state) is natural, so to speak. For this reason, the Reichsnährstand (nourishing state) had the sword alongside the ear of wheat in the emblem.

As Minister of Agriculture and Reichsbauernführer (Reich Farmers’ Leader) Darré was allowed to hold a speech at the state occasion on the Bückeberg; however, he played no role in the preparations of the event.

Walter Darré was the leading agricultural theoretician of the NSDAP and SS and main representative of the Blut und Boden (blood and soil) ideology. He was a close colleague of Heinrich Himmler, the SS “Reichsführer”. As leader of the “Race and Settlement Head Office”, Darré worked on the criteria for the “breeding of a German elitist race.”