Hitler on the speaker´s rostrum

Hitler´s speech formed the closing highlight of the event. The speaker´s “pyramid”, which was occupied on three sides by the SA, was located at a considerable distance from the public. As soon as Hitler climbed the steps he returned to his usual role: the “People´s Chancellor”.

Hitler was “a master of the masses” (Elias Canetti). They did, however, have to be “warmed up”, livened up beforehand. 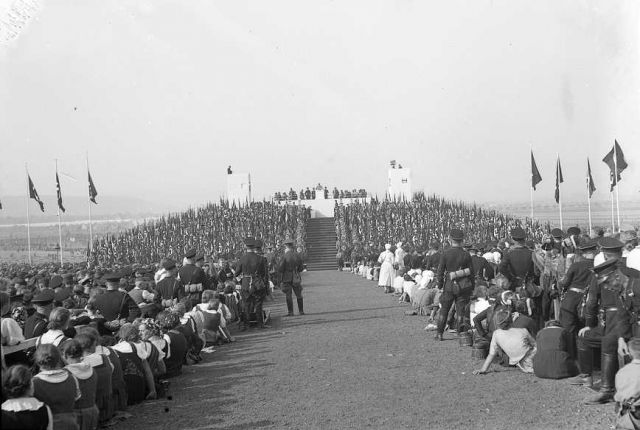 Hitler on the speaker´s rostrum in front of an attentive audience, undated (1935 or later).

With regard to content, Hitler limited his speech to a few topics; the aim of which, when repeated often enough, was to make it comprehensible to everyone. His language was full of phrases, currying favour with his audience and simplified to the verge of being comical.

It was not the Harvest Thanksgiving which dominated, but the political topics: the anti-democratic, authoritarian internal state and the expansion of externally aimed militarisation. Politics meant politics of power. Peace was no option.It was about battle and power. Hitler instigated mental mobilisation, forcing a willingness for war.

Today Hitler´s speeches seem trivial and boring. In those days however, they created an effective, suggestive energy with the emotionalised crowd. The crowd´s enthusiasm in turn affected Hitler, so that he became even more obsessed.

The frequent rounds of applause from the crowds, which the censured press reported, were almost certainly staged.