From 1933 the propaganda, now generously financed by the public treasury, worked increasingly on building up a personality cult around Hitler. Goebbels expanded the already established expression of Führer to one of superhuman qualities and glorified Hitler as an Erlöser (Redeemer) and gifted healer.

The myth made Hitler destiny´s chosen saviour of the people and nation. Propaganda regarded Hitler as the greatest German and unique genius, who could meet every challenge: as greatest statesman, as greatest artistic creator and developer of the nation, as greatest military chief and commander of all times.

At the same time however, in this orchestration of Hitler, he was also the good neighbour and simple man of the people, who “exhausted” himself for the people.

The excessive exaggeration of Hitler unintentionally became a subject of ridicule. The general public summed it up simply with the abbreviation “Gröfaz” (= größter Feldherr aller Zeiten) (greatest Commander of all times).

1935: “Destiny has made it possible for us this year, not only economically to yield a rich harvest, but it blessed us with more: the German military armed forces have risen again. The German fleet will arise again. German towns and beautiful villages, they are protected, the power of the nation is watching over them, the force in the air”.

“Yet still at this moment you are all part of something great!

Believe me: we are facing harder challenges than other nations and other countries: too many people in a too small living spaces, there is a lack of raw materials, a lack of cropland, but nevertheless: Is Germany not beautiful? Is Germany not wonderful anyway? Do our people not live decently even so? Do you want to swap this for anything? (Tumultuous cries of “never” from the crowds).

At this Harvest Thanksgiving Festival I am not showing you the military display drills for nothing. Do not forget that we would all not be here now if it wasn´t for sword and shield watching over us. (Enthusiastic manifestations from the crowds).

We don´t want to start quarrelling with anyone. But everyone should know: the garden that we ploughed, we will harvest alone, and no-one should think that they can break into this garden! The international Jewish Bolshevik criminals should take this warning: wherever they go - at the German borders they will come up against an iron “Stop”! (Long-lasting enthusiastic applause).  (Deister- und Weserzeitung Hameln vom 3.10.1937.) 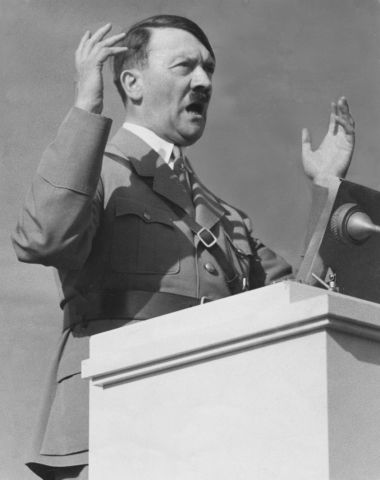