The decision in favour of the Bückeberg was made in the summer of 1933 and was decided at such short notice that the remaining six weeks for the preparation work was barely enough. The organisers had planned for the Fest (festival) to take place during the evening. During Hitler`s speech it became dark but spotlights were focussed on the ring of flags instead of the speaker´s rostrum. 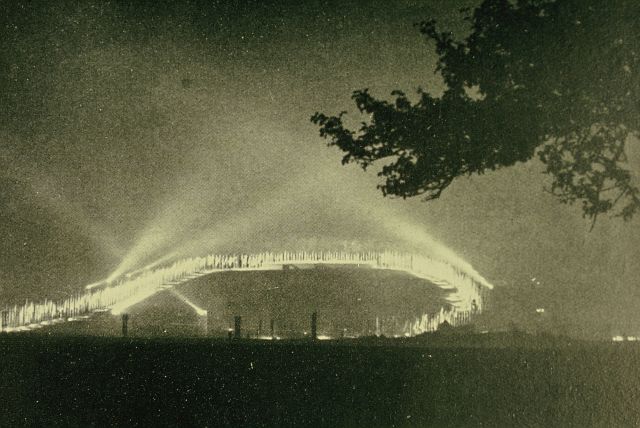 The first Erntedankfest 1933 - Painting by the Hamelin artist Rudolf Riege, 1933

The original oil painting was thought to have been lost. Numerous reproductions of the painting were circulated.

Hitler preferred to hold his speeches in the evening: “During the day people´s will power seems to struggle with the greatest energy against an attempt to force upon them a strange will ….” (Hitler, Mein Kampf, quoted according to Krockow, page 192).

The participants experienced a disaster. The hilly landscape blocked the view of the event for many. The acoustics and the night lighting did not work properly. The march back to the train stations in the dark was chaotic.

The gleichgeschalteten Medien (live broadcasts) however reported that 500.000 people from the towns and countryside were impressed by the programme and its perfect implementation.

It was therefore only logical that in December 1933 Goebbels announced that “the Bückeberg would be used every year for the Harvest Thanksgiving Festival” and decided to promote the hill to the status of “an old Germanic cultural site”. (Deister-und Weserzeitung Hameln, 08.12.1933)