Leveling work performed by recruited labourers using spades and with the help of a field railway truck, 1933

Because of the short preparation time, men worked night and day shifts.

The original hillside, which resembled the shape of a whale´s back, was levelled step by step in several big “construction campaigns” - in 1933 and 1934 but mostly in 1935 and 1937 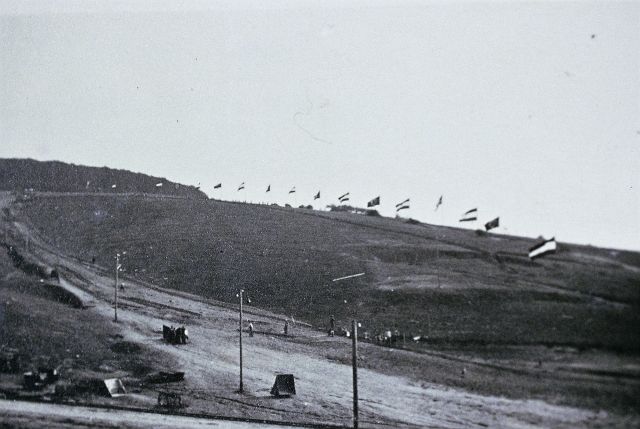 Here a barely changed, partially very uneven slope can be seen - a far cry from the condition of the perfectly levelled area of later years. Other than the swastika flags, the black, white and red flags of the National Socialist right-wing party were raised.

In 1933, due to a lack of time, the site could only provisionally be set up for the rally. Visitors complained of bumps in the ground, which blocked their view of the Führer and of the bad loud speakers, which meant they could not hear his speech. The sanitary conditions were catastrophic and there was no drinking water available.

“The soil here at the Bückeberg is heavy and clayey, when it´s wet it is a thick, muddy mass, when it´s dry it is an incredible dust producer”.

A member of the Reichsarbeitsdienst (Reich Labour Service), undated 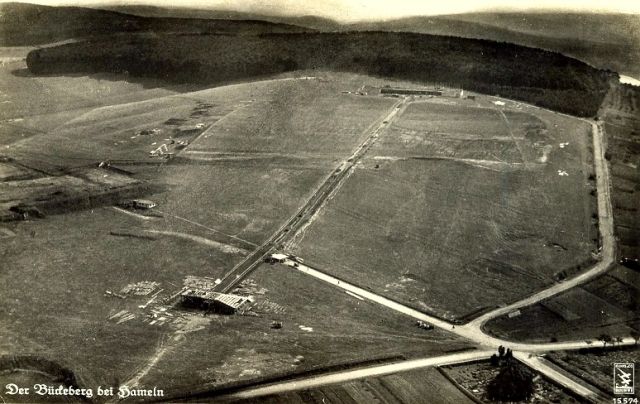 Arial view of the rally arena under construction, undated postcard (1935 or earlier)

Major earth movements can be detected especially at the eastern edge (left) of the site and the building of the speaker´s rostrum (at the front). The hanging copper tree in Hagenohsen graveyard on the front right can also be identified.

After Goebbels proclaimed the Bückeberg to be a permanent venue in 1933, continuous work was carried out on the site.

The hillside came to look as it does now in two major construction campaigns - in 1935 and 1937. It was not only levelled perfectly and equipped with the necessary transmission technology.  At the same time the visitor capacity was increased considerably. It was planned to be completed by 1940.

The Reichsarbeitsdienst (Reich Labour Service) provided the majority of the 450 labourers throughout the year. The men worked in two shifts predominantly by hand.

Apart from manual labour, machines were essential in order to enable the speedy construction work.

In order to expand the site and to lower the middle, the ample, left over earth was piled up at the sides. By doing this, the site was widened, particularly to the east, by approximately 50 metres.

A steep slope with a height difference of at least 10 metres emerged during the preparation of the site, because the given terrain already sloped to the east. For visitors approaching the arena from the sides, it meant that 15 metre wide steps had to be created, five on the east side and five on the west.

The excavation of a ditch for the main sewer, running underneath the Mittelweg (central pathway) using pneumatic hammers.

Civil engineers laid pipes with numerous taps for drinking water around the site. To supply the pipes and the Reichsarbeitsdienst (Reich Labour Service) camp, two elevated water tanks above the Festplatz (arena) were built and two wells were drilled at ground level. Because the rocky ground could not absorb any water, the site also had a drainage system installed.