Hundreds of Thousands at the Bückeberg 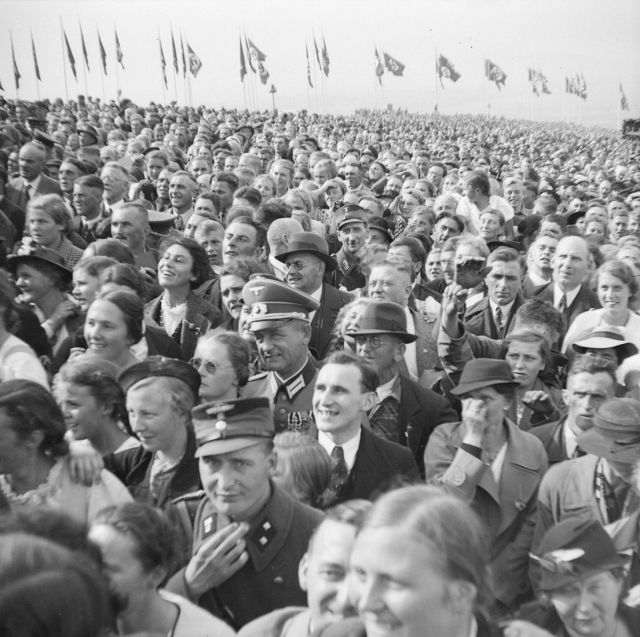 Crowds of People at the Bückeberg, undated (probably 1935)

On a basis of four people per square metre, 400,000 people were squeezed into the rally grounds in the first two years. After the extension of the arena, there was space for up to 600,000 in 1935. At least as many visitors gathered outside the arena as well.

The official figures provided by the Ministry of Propaganda were significantly exaggerated: 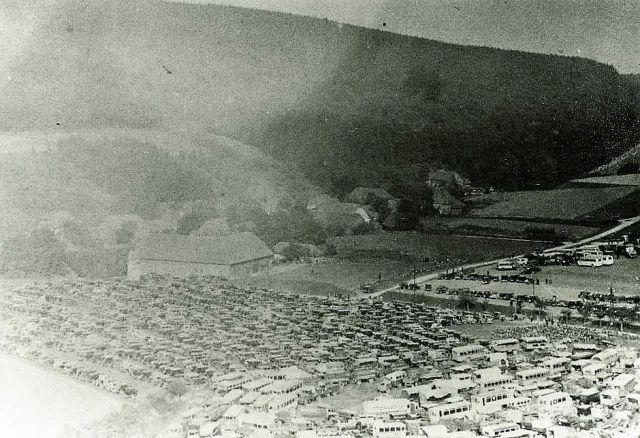 Stagnation would have meant a step backwards for the NS dictatorship which was fixated on popularity and success. It was only in 1936 that the censored press reported there to be no increase in numbers, as it could not be ignored that fewer visitors had attended due to rainy weather.

Even though the official figures were too high, it can still be presumed that it was a gigantic mass event with ever increasing participant numbers.

Eye witness accounts of their impressions and opinions on the Reichserntedankfest (Reich Harvest Thanksgiving Festival) differ considerably. They vary from either being full of enthusiasm to being distanced or disapproving and also realising what dangerous suggestive power can evolve from such a propaganda spectacle. Comments made by those excluded by the Regime from the Reichserntedankfest (Reich Harvest Thanksgiving Festival) are not known.

“I will never forget it! Harvest thanksgiving festival in 1935 at the Bückeberg!... We are standing! Standing on the path to the upper podium. The Führer has to walk past us! It is seven o’clock. Still so early, and he won’t be here until midday! A long wait. Long enough to prepare for the moment! And – is our blood not already pumping faster through our veins? The sun is rising! It is still covered by clouds, but it is rising! Streams of people are rolling in from all sides, slowly, without an end in sight. Our eyes are searching the horizon with binoculars: people – people.” (Anonymous author, In: Curt Reinhard Dietz and Erich Langenbucher: Tell, Comrade! Experiences in the German regions. With a preface by the Reich Farmers‘ Leader R. Walther Darré, Berlin [1st edition 1936] 2nd edition 1941, pg. 141 – 149)

“When he goes past you, it is as if Jesus is looking at you.” (A female farmer from the Protestant influenced district of Schaumburger Land, eye witness interview, undated)

"Now the Führer made his way to the speaker’s rostrum and spoke as in the year before… about ¾ hour from his notes, effective as ever, even if there were no new thoughts and phraseology and also without any closer reference to the actual day’s event: there was little mention of neither thanks nor harvest. The image of his soul made a more unforgettable impact than the Führer’s words: the huge circular arena filled with people placed in front of the beautiful, German landscape – it was as if heaven and earth were paving the way at this one location and in this one single man for the old German idea of coming together to be reincarnated in these mass events under open skies.” (Georg S., mid 30s, civil servant from Hanover, 1934, Lower Saxony State Archives Hanover)

“My father wrote in his diary: “Atmosphere nothing special”, whilst I was impressed by the Führer at such a mass rally and was glad to have had a good opportunity to take photos.” (Eye witness 17 year old Ulrich Sahm, who sat with his father – Lord Mayor of the Reich capital Berlin – on the Ehrentribüne (honorary rostrum) very closely to Hitler).

"We did not want to stand amongst the crowds but found space behind the speakers’ rostrum which was almost 20 metres high. We had a good view of everything from there.” (Merchant Carl Krüger, almost 50 years old, from Bückeberg).

"And then the festival began. The streets were black with people; I always compared it to a slowly wriggling lindworm … [After the end of the Fest (festival)]. The lindworm started to move backwards and whoever found themselves in its path couldn’t escape, as happened to an uncle of mine who wanted to go to Hamelin. He only escaped in Hilligsfeld.” (the then 8 year old Maria Nelde from Hagenohsen 2010 in an interview)

"Extreme tension and expecation filled the people who were waiting for the arrival of Hitler and his entourage. As the convoy of vehicles approached from afar on the plain below, a storm of thousands upon thousands of uninterrupted cheers of “Heil!” resonated down the slope of the hill towards this man, who knew how to hold the German people under his spell.

He then held a speech from the lower rostrum which ended in the enthusiastic roar of the masses. Finally he ascended the cleared, central pathway with his closer followers. But he only progressed slowly. On both sides female farmers lined the path in their decorative costumes from Bückeberg, Weserbergland and Westphalia. They all pushed towards him in order to see him, to shake his hand and look into his blue eyes. A beaming smile was on his face and suddenly he was standing in front of me, less than a metre away and looked into my eyes for several seconds. He had an undeniably powerful effect. The enthusiasm of the thousands, who continuously shouted “Heil” intoxicated every single individual and that increased the effect of this man’s personality. He grabbed numerous hands everywhere which were held out towards him, touched cheeks and stroked their hair.” (Swiss journalist Konrad Warner)

“In autumn at the harvest thanksgiving festival at the Bückeberg, streams of people from near and afar passed by, stood at the side of the streets, shouting “Sieg Heil” and “Heil Hitler”.

It was then that I went into my garden and picked apples. When they came back, they had seen their master and I had all my apples in the basket!” (Werner Düwel, Coppenbrügge, eye witness interview, undated)

"We didn’t go there! “(The son of an agricultural worker from Kirchohsen, eye witness interview, undated)