The Design of the Bückeberg

Aufmarschfelder (Parade fields) for the millions 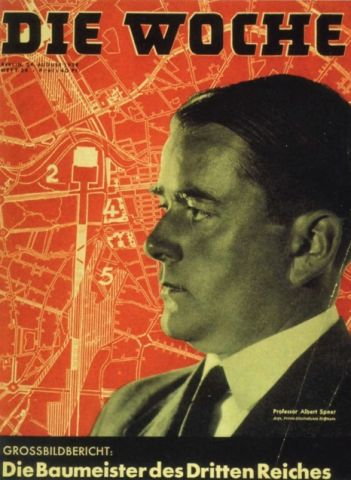 As of 1933 Joseph Goebbels, Minister for Propaganda, organised a number of mass rallies with hitherto unseen dimensions for hundreds of thousands of participants. This should serve as proof of the popularity of the NS Regime by 1933.

Both of the first two earliest and largest rallies were the Maifeier (May Festival) at Tempelhofer Feld in Berlin and the Reichserntdankfest (Reichs Harvest Thanksgiving Festival) at the Bückeberg. Both events were designed by the architect Albert Speer. They served as a role model later for all NS mass events, for example the Nuremberg Rally.

Albert Speer (1905 - 1981), active member of the NSDAP as of 1931, was promoted to “The Führer´s Architect” and “Master Builder of the Third Reich” due to his designs for mass rallies. As of 1942 he worked closely with Himmler’s SS in his role as Minister of Armaments and was one of those most responsible for the exploitation and death of hundreds of thousands of forced labourers and prisoners in concentration camps.

Manipulation of individuals by the masses

“The material with which to create a mass event, first and foremost is always the crowd of people themselves.”

This concept requires huge parade fields for the “masses of millions of awakened people”. In this way the individual becomes a tiny part of the huge crowd.

Building materials should be used sparingly. A framework however is necessary in order to cut off the people from the outside world. This favoured their “submission” and “enforced conformity”. The framework should turn the area into a “sacred site”. (Albert Speer, 1933)