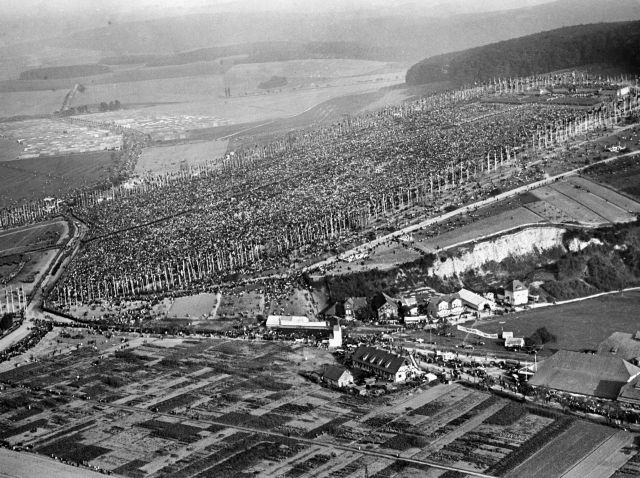 The sloping hillside is formed like a huge amphitheatre and is framed with a ring of flags. In the right hand corner a large stage can be seen. Hitler´s speaker´s rostrum was situated 800 metres away at the foot of the hill (outside the left edge of the picture). In the background on the left, a camping area and public facilities are hinted at.

The Reichserntedankfest  (Reich Harvest Thanksgiving Festival) took place in the province as an “agricultural public outdoor festival ”. In the countryside and with its target audience, the farmers, the NS-regime did not anticipate any opposition. Many of the country dwellers regarded it as a particular honour, as farmers, to be the centre of national attention on that day.

For the choice of location there were certain ideological settings. Lower Saxony, with its large farms, was considered by the National Socialists as das deutsche Bauernland (The farming country of Germany). Besides that, the festival should take place on the “German River Weser”, which has both its source and estuary within Germany. With that decision made, the preselection of the geographical location was narrowed down.