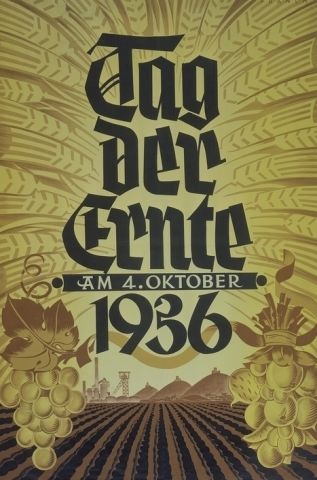 The NS-Regime took over the nation's deeply rooted and popular Christian festival of thanksgiving. It changed it into a “national holiday” with a central mass open-air event on whole new scale taking place at the Bückeberg.

The community of the Führer und Volk (the Führer and the people) was at the centre of the production. For the gathered Volksgenossen (comrades) it should be visible, perceptible and tangible.

The participants were offered a perfectly staged complete sensory experience. A military scenario of flags and decorations, marching music and assembled crowds overwhelmed them. Blocks of uniformed people conveyed unity and the marching Kolonnen (columns) conveyed uncompromising “Vorwärts” (forwards). The participants should feel that they were part of a powerful community.

Apart from the main Feier (celebration) at the Bückeberg, where Hitler was always personally present, local celebrations took place everywhere. In order to hear the Hitler speech everyone had to be situated near a public loudspeaker or a radio.

The event had an underlying intention of no lesser importance: The Reichserntedankfest (Reich Harvest Thanksgiving Festival) should provide effective public pictures of the Einheit von Führer und Volk (unity of the Führer and the people), which propaganda distributed all over Germany.