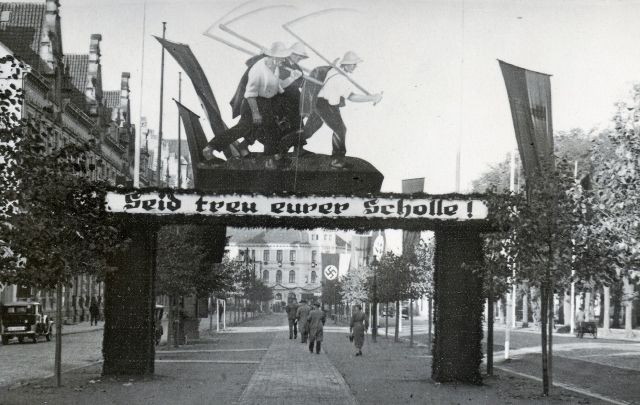 “Honorary gate” in the then Adolf-Hitler-Straße in Hamelin (today Deisterallee), 1935

The road was called Deisterstraße until 1935, from 1935 until 1945 Adolf-Hitler-Straße, then  Deisterstraße again and as of 1953 Deisterallee.

On orders of the Ministry of Propaganda, the houses and streets near to the Bückeberg and those along the approach roads used by Hitler’s convoy were to be decorated with garlands made of evergreens, swastika flags and banners.

The form of “decoration” was dictated down to the last detail and was organised and supervised by local committees.

The Ministry of Propaganda issued the following slogans in 1933:

“Agriculture is the source of life of the German people!”

“A strong generation of farmers – through the new land heritage law!”

“The calloused hand of the farmer – provides bread for everyone!”

“Donate to the winter relief fund for the German people!”

“Town and country – hand in hand!”

In Hamelin the mayor and the NS district leader addressed the citizens of the town in 1934 shortly before the Fest (festival) with the words:

“The houses of the town streets must be decorated such as has never seen before for the reception…. It is a matter of course that as of immediately every house is to be decorated with garlands and wreaths, with swastika flags and signs of nationality. Everyone is to express their respect for the Führer by decorating their houses in a way not to be surpassed. We expect no one to exclude themselves from it. On Sunday Hamelin must exhibit festive decorations such as have never been achieved in any town before. We Lower Saxony people know what we owe our Führer” (Town Archives Hamelin) 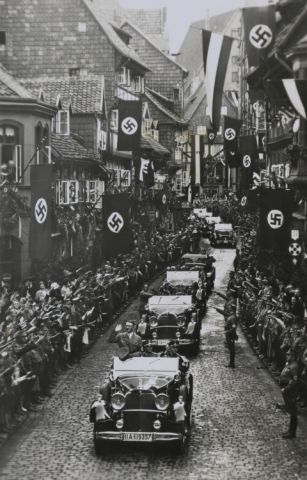 Procession of Hitler’s convey through the decorated town of Hildesheim, 1934

The inhabitants of the villages around the Bückeberg were put under severe pressure by the local NS officials not only to decorate the houses along the approach roads but to decorate the whole village.

In 1934, as Hitler was on his way through Hildesheim to the Bückeberg, according to his son, a house owner reacted as follows:

Our house had to be decorated for this occasion. This meant there was no holiday atmosphere for father but rather a feeling of anger. Because he had been a member of the Centre Party …. Now he had to decorate his house for an unwelcome guest with the insignia of the Nazis whose power he detested: swastika flags were to hang between the garlands.

Father carried out this work with reluctance. He could not avoid it; we all understood the National Socialist regime of terror. … Father was only happy again when he was able to remove all these “decorations” from the house façade. (Karl Pagel, Hildesheim, Harvest Thanksgiving)

Decoration of the Houses as an Instrument of Social Control

Whoever refused to decorate their house had to reckon on punishment and social ostracism. In 1933, Jehovah Witnesses were denounced in Hamelin to the police for not having decorated their houses. Jehovah Witnesses reject every form of admiration for the State on religious grounds.

The regime forbade people of Jewish beliefs to exhibit national symbols. With their undecorated houses, they involuntarily confirmed their exclusion from the Volksgemeinschaft (national community) as imposed by the NS regime. 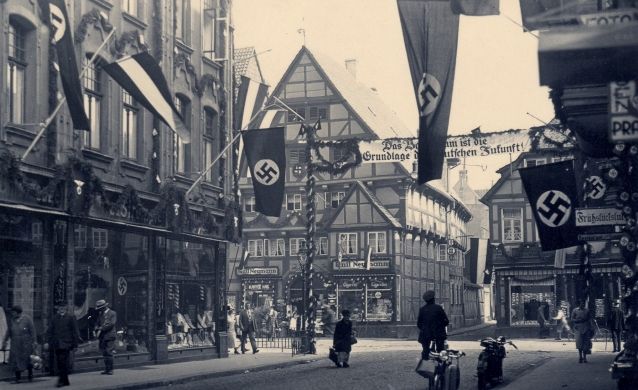 Hardly anyone chose to ignore the summons to decorate the houses as social pressure was too strong. Anyone who carried it out under protest or under force documented their approval of the regime to the outside world. The NS regime distributed the photos of the decorated streets and houses nationally and internationally and thus achieved an additional appearance of legitimation.