Blood and Soil in Practical Politics 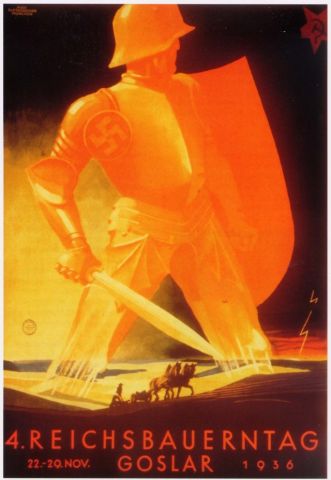 Poster for the Reichsbauerntag (Reich Farmers‘ Day Rally) in Goslar, 1936

The farmer who is able to defend himself carries arms and a sword. In the top right corner, the danger of expropriation and collectivization of Soviet communism (red star with the hammer and sickle) are lurking in the dark.

Many farmers mocked Darré‘s admiration of the Teutons. His Blut und Boden (blood and soil) mysticism passed them by and was disparagingly abbreviated to “Blubo”. Darré’s hostility towards the Church met in part with open resistance.

In the Second World War the ideology of Blut und Boden (blood and soil) formed the justification for Himmler’s brutal settlement and Germanisation policy in Poland and the Soviet Union. This gave the Volk ohne Raum (people without space) the right to create new Lebensraum (living space) for themselves. The native Slavic population in Poland, Belarus and the Ukraine were enslaved, driven out or murdered.