Harvest Thanksgiving and Blood and Soil 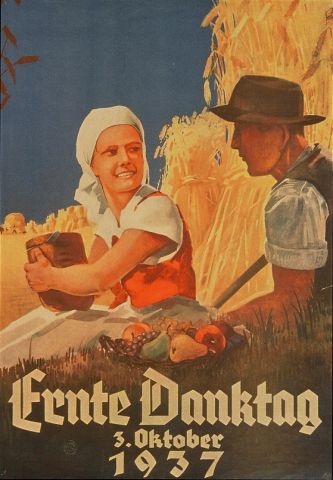 The advertising seizes cleverly on the desires of the modest world of village and rural customs. The National Socialists considered the farmers a “source of power” of the “northern race” and the origin of the German culture.

Posters and postcards, which advertised the event at the Bückeberg, conveyed the impression it was the Fest des deutschen Landvolkes (festival of the German rural community). The farmers were supposed to feel an important part of the propagated Volksgemeinschaft (national community) and were monopolized for the NS regime.

As interviews with participants have shown, many farmers understood the Fest (festival) in this way and greeted it with much gratitude. At the same time, they celebrated the harvest and themselves, feeling they were once again respected after the long years of neglect in the Weimar Republic and they were grateful for the attention paid to them by the whole community.

Farmers came – as expected by the organisers – not seldom in their attractive, local traditional dress. In order to see all “NS regions” represented by farmers wearing traditional costumes, the regime operated appropriate mobilisation. In this way, 8,000 wearers of traditional dress arrived every year from all “German states” The event organisers allowed them to march along the Mittelweg (central pathway) and colourfully line Hitler’s route durch das Volk (through the people).

In the flood of pictures of the Bückeberg in NS propaganda, the farmers in traditional dress were clearly over represented. However, harvest thanksgiving and farmers hardly played a role during the event.