Hitler on the pathway through the people 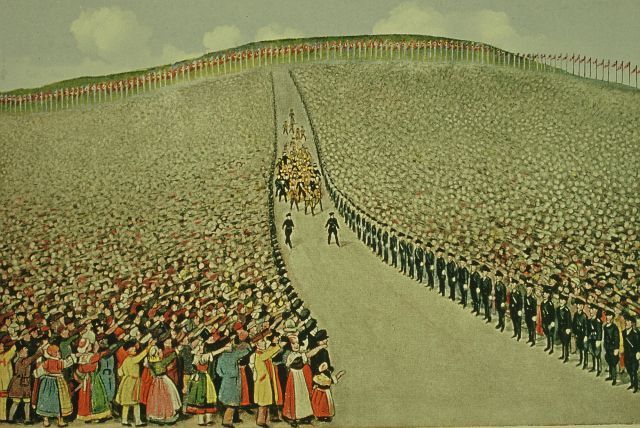 A colour picture of Hitler’s "walk through the people", undated

The Mittelweg (central pathway), a half a metre high elevated, five metre wide damm, connected the Ehrentribühne (honorary rostrum) at the top end of the arena with the speaker´s rostrum at the bottom end of the arena as a central 800 metre long axis. During the long wait for Hitler to appear, densely packed Kolonnen (columns) of uniformed people marched up and down the pathway to booming marching music. Farmers in traditional costume also passed by and took up their colourful positions at the side of the pathway ready for Hitler´s appearance.

During the Fest (festival) the pathway was reserved only for Hitler and his entourage. A tight cordon of SS-men and wooden barriers separated the path from the public.

After his arrival Hitler moved along the Mittelweg (central pathway) up to the Ehrentribüne (honorary rostrum) accompanied by enthusiastic Heil - cheers from the crowds.The atmosphere reached its first peak. About an hour later - after the military display of the German armed forces was finished - the ritual was carried out again, only this time directed towards the Rednerkanzel (speaker´s rostrum), again to a roaring applause. 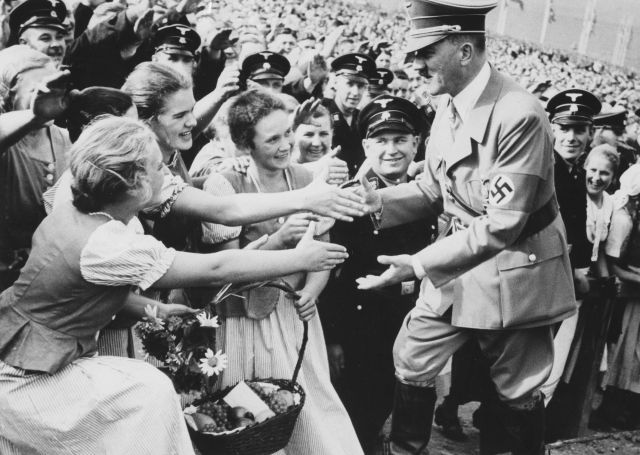 Führer-worship on the Mittelweg, (Central Pathway) 1937

Walking along the Mittelweg (central pathway), amongst the enthusiastic crowds, was the main item on the agenda and was officially named Weg durch das Volk (way through the people).

On the Mittelweg (central pathway) Hitler embodied the people´s Chancellor, or more so, “the man of the people”. Again and again he lingered with individual enthusiasts, whom the SS let through the barriers, shook numerous hands and allowed himself to be touched as if he were sacred. It took him more than 30 minutes to cover the distance, twice as long as scheduled.

Leopold Gutterer, the director of the Fest (festival), described the symbolic importance of the Weges durch das Volk (pathway through the people) in 1937:

“It is symbolically as if the Führer rises from the foot of the hill out of the crowds to the top of the hill. After all, he rose from the people to become the Head of the Nation.

And just as he returns from the top of the Bückeberg and immerses himself amongst the crowds, he connects again and again as Führer and Reich Chancellor with his people.” (Deister- und Weserzeitung Hameln vom 7.10.1935.)

No other NS mass event ever experienced such a production of physical closeness, where it was as if there was unity between the Führer and Volksgemeinschaft (community).

Only Hitler´s photographer Heinrich Hoffmann was allowed to take photographs of the Weg durch das Volk (pathway through the people). In reality, on the Mittelweg (central pathway), Hitler was barely visible for those standing nearby. For the majority of the visitors at the Fest (festival), apparently the idea that Hitler was there was enough to break out into uncontrolled cheering.