Battle of the Future

From Riding Games to Tank Battles and Bombing Wars

Panoramic view of the Schlacht der Zukunft (battle of the future), 1935

Just like from a military commander’s hill position, the visitors looked onto the battle scene: Tanks are attacking. High plumes of smoke portray fires; just a few houses of Bückedorf remain unscathed.

The portrayal of violence and war reached its pinnacle in the large Schauübung (military show) of the German armed forces. It was the most important and longest feature of the programme alongside Hitler’s appearance.

The wide plain behind the speaker’s rostrum offered plenty of space to stage a huge panoramic display of battle for the spectators. Schauübungen (military shows) were also common at other large NS events, however, due to a lack of space nowhere near this size.

What was shown at the Bückeberg with blank cartridges, canon fire and artificial fog had nothing to do with genuine manoeuvres but offered the hundreds of thousands a brutal scenario of violence and war. Apart from the Navy, all the armed forces went into action “just as in war”.

Military Schauübungen (demonstration shows) at a harvest thanksgiving festival? That may be astounding and disconcerting today. At that time, hardly anyone was likely to have taken offence, on the contrary: This demonstration of Germany’s long missed military strength appealed to most visitors. Moreover, the Schauübung (military show) offered exciting entertainment.

Spectators viewing the convoys of tanks on the eve of the Fest (festival) in Bückedorf, undated (1935 or later)

The Schauübung (military show) became more extravagant from year to year and unleashed a large propagandistic effect. It provocatively demonstrated Germany’s growing military strength to foreign countries; within Germany, it was putting people in the right frame of mind for intensified rearmament and ultimately for another war.

In 1937 they already depicted a piece of war reality: The Luftwaffe used the same heavy bombers which had destroyed the Spanish town of Guernica shortly before. 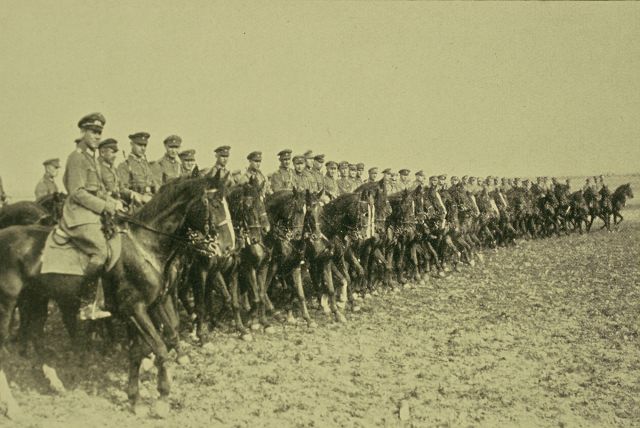 Riding routines of the Reich Army, 1933

The cavalry of the Hamelin barracks presents riding routines, also forming a swastika which turned on its axis.

The Bückedorf bombed and in flames, undated (1935 or later)

Houses of the mock up village constructed for the first time were shot down in flames by the cavalry, motor cycle marksmen and infantry.

The new German armed forces provocatively displays –after breaking the Treaty of Versailles – its most modern weapons: Tanks, bomber aircraft and paratroops.

The contested village of Bückedorf, which pioneers had constructed, goes up in flames in a tank battle and under a hail of bombs. The local newspaper Dewezet speaks with the power of clairvoyance of the “Battle of the Future”. 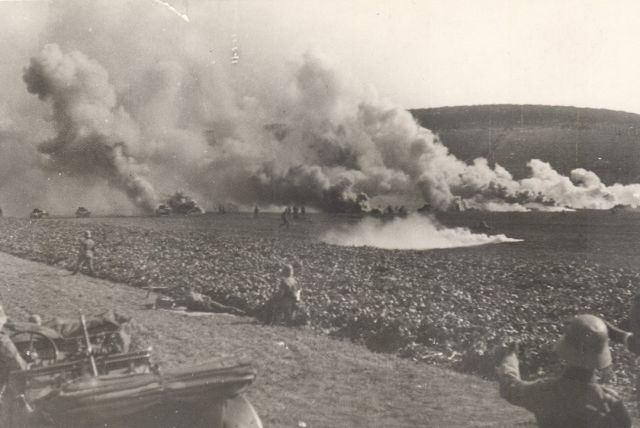 The unwavering fascination of war and violence:

“But it was … a fantastic picture, how the huge buildings went up in crackling flames, surrounded by a raging battle, enveloped in smoke and fog.

It was particularly effective when the planes dived towards the burning village, the tanks emerged from a thick wall of fog and raced through the village and among deafening noise ploughed ruthlessly … over walls, fences and the cemetery.”

Bomber aircraft over the Bückedorf, postcard 1937

10,000 soldiers with 2,000 tanks and vehicles took part in the Schauübung (military show) which had been extended to last for a full hour. Bomber aircraft destroy an improvised bridge over the Weser; Bückedorf goes up in flames once again.

On 26th April 1937 the German Air Force destroyed the town of Guernica whilst in action in the Spanish Civil War – the first war crime of the NS State.