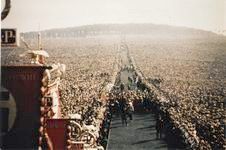 The Reichserntedankfest (Reich Harvest Thanksgiving Festival) at the Bückeberg near Hamelin was one of the largest mass festivals of the National Socialists.

Neutral visitors such as the Swiss journalist Konrad Warner confirmed a “frenzy of enthusiasm” amongst the masses.

His propaganda glorified the rally as a success, growing from year to year, which he documented with exaggerated, continuously increasing participant numbers. As a result in 1937, according to NS official statistics, 1,2 million people attended the last Reichserntedankfest (Reich Harvest Thanksgiving Festival) at the Bückeberg.